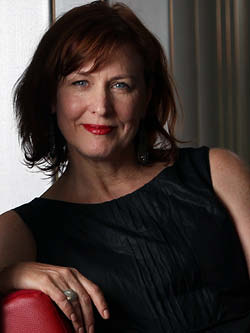 In this session, Lindy Hume, one of Australia’s leading creative thinkers, takes us through the key insights from her paradigm shifting PhD. Hume’s exploration of the three spheres of creativity – Artist as Citizen, Practice and Process, and the Creative Environment – and how they intersect, challenges existing thinking and promises a new way of how we frame and present creativity within Australian communities.

Grounded in her three decades as an artistic leader, this condensed presentation of her recent PhD thesis, The Bigger Picture: A landscape-oriented creative practice, puts forward an orientation shift from portrait to landscape as a metaphor for the rearrangement of aesthetic, cultural and social values. Emanating from regional Australia, it challenges metro-centric perceptions of cultural life. It proposes that a landscape orientation, which brings the importance of place to the fore, is the more influential paradigm.

Hume’s Landscape-oriented creative practice, is a compelling alternative ideology for places looking to present their community’s point(s) of difference in a fresh light. Translating the findings from the PhD through to her work as the Artistic Director of Ten Days on the Island and Four Winds Festival, this session is a must attend for community leaders and place practitioners looking to identify a new way of positioning places for growth in a post-pandemic environment.

Lindy Hume, AM, is one of Australia’s leading directors, acknowledged internationally for fresh interpretations of a wide variety of repertoire, and for progressive artistic leadership of a number of Australian artistic and cultural events, including Sydney Festival (2010-2012) and Perth International Arts Festival (2004-2007). Lindy has most recently been appointed Artistic Director of the Four Winds Easter Festival, Bermagui and is also currently Artistic Director of Ten Days on the Island, Tasmania 2019-2023. She is also a stage director who regularly creates new productions for major opera companies in Australia, NZ, Europe, America and the UK.

New Australian work, a focus on contemporary Indigenous culture, the development of a distinctive regional identity and celebration of local communities have been fortes of her tenure as Artistic Director of the Perth International Arts Festival 2004-2007, and as Festival Director of the 2010-2012 Sydney Festival, Australia’s largest and most popular annual arts event. Alongside a focus on Australian innovation and bold international programming, Lindy’s Sydney Festivals were recognised for their cultural diversity and inclusiveness, featuring programming from the Asia Pacific region and Indigenous Sydney. At Ten Days on the Island, she has overseen a new ‘traveling’ festival model spanning three weekends with bespoke local, national and international programming across three heartlands of Tasmania.

Having recently completed her PhD on arts practice in regional Australia, she is one of Australia’s leading thinkers on the importance of grounding artistic and cultural performance in a place’s DNA.