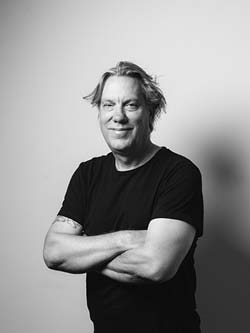 Brian Ritchie is a multi-faceted musician and arts curator. His musical career extends across the fields of rock, classical, folk, blues, Japanese traditional music and beyond. He first came to international prominence as bassist/multi-instrumentalist with post-punk trio Violent Femmes. He has also performed and recorded with artists such as Rodriguez, Lou Reed, Australian Chamber Orchestra, electronic music pioneer Pierre Henry and many more. He is a licensed teacher and performer of the shakuhachi, Japanese Zen flute.

Brian moved to Tasmania in 2007 and became the Music Curator at Mona (Museum of Old and New Art). In this capacity he organises MONA FOMA (Museum of Old and New Art Festival of Music and Art) combining music, sound art, visual art, dance, spoken word and theatre. MONA FOMA has won the coveted Helpmann Award for Best Contemporary Music Festival three times and the 2016 Sidney Myer Performing Arts Award. Award winning curated events such as The Barbarians by IHOS Music Theatre and Opera and 48 Fugues for Frank by pianist Michael Kieran Harvey stand alongside touring international artists such as Philip Glass, Nick Cave, PJ Harvey and Neil Gaiman, to name only a few of the thousands of performers and artists to grace Mofo spaces.

Brian and his team organise over 100 events at Mona every year, including the Mona Market (MoMa), Jazz at Mona (JAM), onsite concerts and art openings. He is an avid mentor of local musicians in Tasmania. Brian has had long-term engagement with Australasian indigenous musicians. He mentors Aboriginal musicians at the annual Bush Bands Bash in NT, directed music for the project “Spirit of Churaki” as part of the Bleach Festival for Commonwealth Games on the Gold Coast and with BighArt in Roebourne in WA.

He is the Chair of the Australian Art Orchestra Board of Directors.